The Untold Story of a Silent Superpower: Chaga Mushrooms 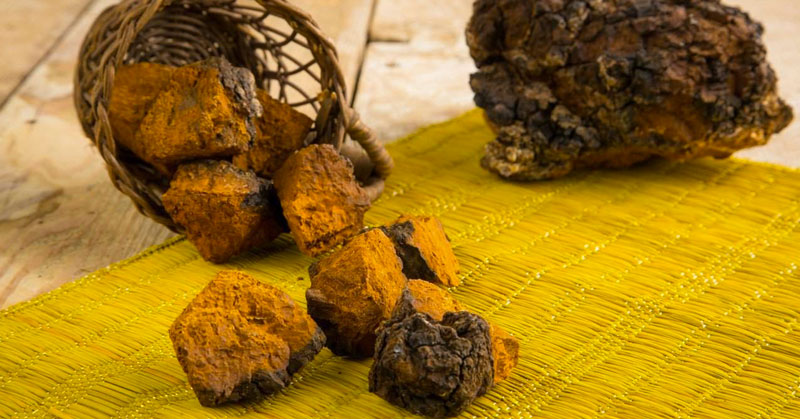 There is a new food superpower in our midst, and it has gained ranking for its superb antioxidant properties: Chaga mushrooms. With a mix of charcoal and gold hues, these mushrooms slag and sprawl like infected meteorites on the backs of dead birch trees. They are powerful, parasitic, and (almost) as promising as Wakanda’s Vibranium.

…except you can’t make an epic suit out of it. But with the innate properties of Chaga mushrooms, you won’t need to. Research shows that this fungus contains promising health benefits for people of all ages. Its high antioxidant content makes it superior to its line of competitors, such as blueberries, pomegranates, acai, and their likes.

I’m going to get a bit personal now. Although I’m a pharmacist and functional medicine practitioner, I, too, like to live life on the edge. I indulged in some reading recently—just a casual afternoon cuddling with research studies and medical journals—and shortly thereafter, I decided to commit to Chaga mushrooms, once and for all. So I woke up the next morning, dumped my regular smoothie, and settled with a cozy cup of Chaga mushroom tea. My first sip brought with it a whiff of familiarity. I know this taste. It was like the shy little sister of bold black tea: humble, mute, and vaguely visible. I sipped some more.

Twenty minutes later, I found myself busting into my running shoes and bursting out my front door. Something felt different. A transformation occurred—like I had morphed from a suburban, mother-of-two pharmacist and into an unstoppable Wakandan warrior. I must wear out this energy! I ran for miles and miles, hours on end, until my feet met a previously unpursued path. I had never run that far before, but I continued anyway. And when I returned home, my newfound endurance carried me through more weight lifting and into a work day with utmost mental clarity. It was a beautiful sensation. That effect—that energy boost, that unabated agility, or whatever you want to call it—lasted for days.

What exactly is Chaga Mushroom?

In two words: a fungus. It’s not the prettiest plant in the woods, but what a Chaga mushroom lacks in outer beauty, it makes up in medicinal aptitude. Chaga mushrooms have one of the highest Oxygen Radical Absorbent Capacity (ORAC) scores of any food, which speaks to their ability to protect the body from aging and fight disease-causing free radicals. Hmm, maybe they are just as good as Vibranium, after all?

What are some of Chaga Mushrooms’ superpowers?

How do you consume this superfood?

You don’t need to be a Kimberly Snyder or a Dr. Mark Hyman to whip up a Chaga-infused concoction. The method is simple. Add two to three chunks of Chaga mushrooms to one to two quarts of water in a slow cooker/crock pot. Set the mixture on low and cover the pot while the mixture steeps for up to 12 hours. Drink it hot or chilled, as a base for flavored tea, coffee, or your favorite fruit smoothie. There are no rules! Chaga mushrooms are versatile enough to be bent to your preference, so be creative. For the little ones, blend half a cup of Chaga mushroom tea with ice and honey and serve! The kiddos will absolutely love it.

If you do give this superpower a chance, like I did, please share your experience with me in the comments below! I would love to hear all about it. Here’s a brand I really recommend.